What are the biggest mistakes owner’s make when purchasing a pest control sprayer or weed spray rig? Here are my top 4:

1. Not spending the time up front to decide what you need.

Power sprayers can help you or hurt you. If you spend some time really thinking about what you need your spray equipment to do, you can make a better purchase decision. 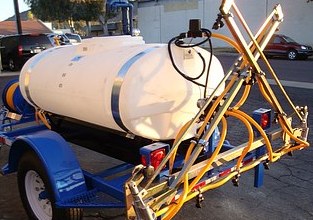 Example: we built a weed spray trailer for a large City government. They wanted a trailer sprayer with a 20' boom for spraying athletic fields. We asked on multiple occassions will they need to use the sprayer for any other purpose. They said no. They were very happy with the weed sprayer we delivered. A few months later they called and said the sprayer was not working properly - they couldn't spray tall trees with it. The sprayer was working fine; the pump was not designed for high pressure applications. If they had considered this during the design phase, we could have used a different pump. The sprayer would have cost a bit more but it would have worked for tall trees. Think. Plan. Act.

2. Buying what’s available instead of what you need

Buy what you need, not what the vendor has on the shelf that he or she wants to move.

Example: A long time pest control customer hired a new supervisor, who insisted they buy a pest control spray rig from a competitor. A couple of months later, they brought the sprayer in. The Honda engine pull cord has broken. Because the engine was so tight against the side of the ATV bed, we couldn't get the Honda recoil assembly off without unbolting the entire sprayer and pulling it out of the bed. The sprayer was designed for a truck, not an ATV. What should have been a 5 minute repair took an hour.

3. Buying what’s cheap instead of what you need

Like almost everything else in life, buying a cheap sprayer rarely pays off. It costs more in the long run because of daily inefficiencies, downtime, repairs, etc.

Example: This photo shows a spray trailer purchased by a large government agency. They got 10 bids and picked the cheapest one. There are quite a few problems with it, but I will share one. Look at the plumbing under the sprayer. It is cheap plastic junk. There is no way this can stand up to Arizona temperatures and bad roads. This one will be on the news when they spill 200 gallons of herbicide downtown. 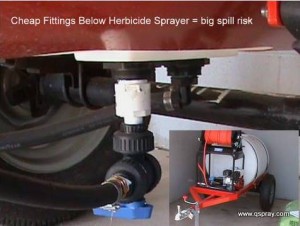 4. Not knowing what you are getting

It is critical to know exactly what you are getting. For example, many buyers look at the expensive components like engine, pump, etc. They don’t think about less expensive components. A cheap plastic fitting in the wrong place can cause a major chemical spill and lots of downtime.

This unknown or unasked question can come back to bite you, as it did in the rig in this photo. Look at the gas tank cap. How are you supposed to put gas in this sprayer? The tech told me they have to unwind the hose in order to get gas into the tank. Unbelievable! Know who you are dealing with and what you are getting. 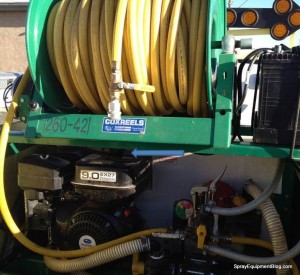