When it comes to your spray equipment, if you know you are about to have a problem, fix it now, don't wait.

The same applies to your pest control equipment and your weed sprayers. 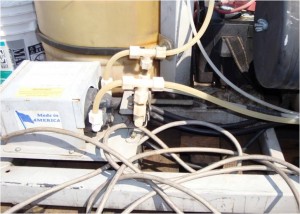 Look at this photo of a mosquito fogger.

The plastic hoses and PVC fittings are severely sun damaged. The pest control technician came in one day and said, one fitting on my fogger broke, can you fix it?

He said he could not spare the time and would take his chances. 3 days later he was back with another broken fitting. We repeated our concern. Again he was too busy. The next day, when the 3rd fitting failed, he called us to schedule an appointment to replace them all.

Think of all the downtime his company incurred. Not to mention gas and payroll to and from our shop three times and having to explain to the client three times why the job wasn't finished. Also, by definition, every hose or fitting break on this machine is a chemical spill.

I run a business; I understand schedules. But this was crazy. We (and the tech) knew there was going to be a problem. Technician was so worried about spending an hour that he wasted many times that.

If you see something on your spray equipment is going to be a problem, get it fixed. It will be faster and cheaper than putting it off. Comments?